Natural rubber is produced by the rubber tree (Hevea brasiliensis). In order to collect the latex milk from tree, an incision is made in the bark of the rubber tree – which is called ‘tapping’. Depending on the use, following the tapping stage the latex milk is processed in different ways. About 70 per cent of natural latex is used for tires. Other products made of natural rubber are e.g. mattresses, condoms, shoe soles, hot water bottles, balloons, rubber boots and seal rings. Natural rubber can be substituted by synthetic rubber for some applications. Synthetic rubber is made from petroleum (i.e. fossil fuel). In many products – such as car tires – natural as well as synthetic rubber is used. More detailed information about rubber, you can find here or in this study by Aidenvironment. 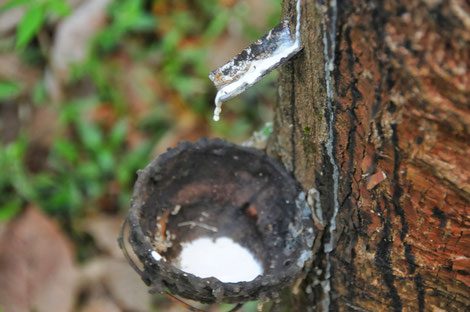 The production of natural rubber can be characterised with ecological and in some cases severe social problems. Low world market prices for natural rubber make it more and more difficult for latex producers to make a living from tapping rubber. Furthermore, studies document cases of extremely poor working conditions. Typical problems include inadequate safety standards, inappropriate use of toxic chemicals, discrimination, excessive working hours and child labour. Agro chemicals used in the production of natural rubber are less controversial with regard to any residue in the final rubber products. Far more important is that their use threatens the health and well being of the people involved in the production and processing of the natural rubber. More information about sustainability problems and solutions in the rubber sector, you can find here.

According to data from the FAO, in 2020 nearly 15 million tonnes of natural rubber have been produced. World production has thus doubled since 2000. Due to good climatic conditions and, for a long stretch of time, availability of land, about 85% of the global rubber production originates from Asia. According to FAO, the biggest producers in 2020 were Thailand (32%), Indonesia (23%), Vietnam (8%) and India (6,5%). The biggest importers of rubber in 2020 were China (27%), the EU (15%), the USA (9%) and Japan (6%). The main reason for this is that most tires are produced in China. More details about global latex production, you can find here.

Fairly produced rubber has only atiny market share. Since 2012 just around 2,260 tonnes of dry rubber content have been traded according to the criteria of the Fair Rubber Association. Because of this, more than 1,130,000 € of Fair Trade premiums could be passed on to our producer partners and have been used there for a wide range of different Fair Trade projects (as of June 2022).

An historical overview and more information concerning the extraction and processing of latex, you can find here