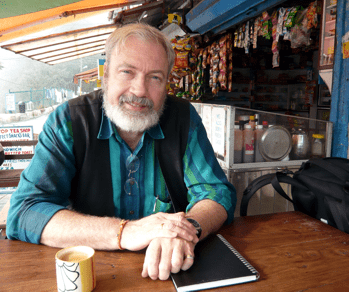 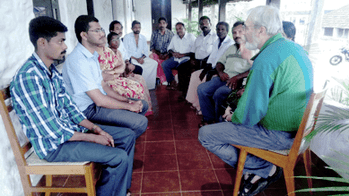 What does a 19-year-old who wants to do his community service abroad do when he is assigned a job in Calcutta in the house where Mother Teresa died?

In Martin’s case: get dengue fever, criticize Mother Teresa politely and look for a meaningful job (at Canon Subir Biswas and the Cathedral Relief Service for the more than one million Bangladesh refugees in Calcutta). How dare a 19 year old criticize Mother Teresa’s work? In Martin’s case, by looking closely and asking questions: to the leprosy specialist, who explains that patients are newly infected with leprosy when beds are too tight, and Mother Teresa, who says there are too many people in need and no one is turned away . He does not understand why the Order enables many poor to die with dignity just because the vow of poverty prevents medical care and healing.

In 1976, after 18 months in India, Martin returned to Ludwigsburg (on the overland route through Pakistan, Afghanistan, Iran and Yugoslavia …) with a different (very Swabian) insight: If work is paid fairly, there can be a way be out of poverty. It took a few years until this concept, which at that time was in its initial phase in several European countries, became generally known as “ fair trade “ , but it can still be practiced. Together with a few friends, Martin built the “ Third World “-Loading in Ludwigsburg – and studied political science and English studies in Tübingen. The world shops were the subject of his doctorate and thus the first dissertation on fair trade.

What emerged from this is a very unique way of seeing fair trade: on a practical level, fair trade must help local producers, while at the same time new groups of buyers and markets for fair trade goods must be opened up. This requires an analytical approach that sees fair trade as part of higher-level structures and networks.Formally, it looked like this for Martin: First chairman of the supervisory board of the fair trading company GEPA, founding managing director of the umbrella organizations of the Transfair / Fairtrade seal initiatives, establishment of the tea producer register, help in setting up national Fairtrade structures, from the USA to Japan … lobbying for fair Trade at the World Trade Organization (WTO) in Geneva and Hong Kong …For Martin it was clear that fair trade could not be limited to small farmers or coffee in the long term. (The fact that he is an avid tea drinker may have accelerated this insight.)Practical, on site, analytically and in structures … From this Martin developed a universal fair trade concept that can also be used for plantations and non-agricultural products. Central to this are a fair trade committee (joint body) elected by the employees, which decides on the use of the fair trade premium, and a sensible formula for setting the level of the fair trade premium: It is based on the concept of a fair Wages and the value of the labor share in the total value of the respective product. (An example: even with milk chocolate, the percentage of work done by cocoa farmers is several times higher than the percentage of sugar farmers – which is why milk chocolate, even without sugar, has a Fairtrade WORK share of more than 50%).

That may sound theoretical despite everything, but the concept came about through trips to producers in India, Pakistan, Sri Lanka, Tanzania, Botswana, Peru, Mexico, Egypt … Conversations about orange juice, tea, cotton, gold, rubber, diamonds, Soccer balls, balloons, hot water bottles, mattresses … through individual encounters. For example with Lal Muthana, at that time manager of the Chamraj tea plantation in the southern Indian Nilgiris (home of Mowgli from the Jungle Book, just so you can imagine the landscape, Kipling, not Disney …).

Good and trend-setting developments such as in Chamraj contrasted with Martin’s growing discomfort with new trends in the organizational structures of fair trade in Europe. Fair trade products were now available everywhere – but at what price? Special rules and “ fair trade light ” options for large customers? High costs for fair trade audits. Requirements for producers to issue the fair trade premium in the current year and thus the end of long-term projects such as pension insurance. Fees for inclusion in the producer register without a sales guarantee …

There was no key experience for him, but at the beginning of the new millennium, Martin was certain: “ If the income of the Fairtrade organizations through license fees exceeds the Fairtrade premium, which goes to the producers, many times over, then that’s fair Trading not much more to do . “

Fair trade, but without the corset of the seal initiatives. Probably the reason is that there was no more room for Martin in official fair trade structures, neither in the standard committee of FLO, nor in classic fair trade companies – as I said: he is not comfortable …

Martin has lived in London since 1998 (how that came about is another story). In the country where the expression “ fair play ” was coined, the idea of an all-round fair and environmentally friendly football arose (just in time for the football World Cup in France): fair trade, from rubber tappers to those approaching, from fair trade -Latex bubble inside the ball up to the 32 panels, which are sewn together by hand to form the outside of the ball.

About 250 grams of natural latex are required for a size 5 soccer ball (for the bladder, valve and lamination inside) – a comparatively small amount given the capacity of a rubber tree. If fair trade is to really make sense for rubber tappers and workers, then everyone who processes natural latex must be able to buy under fair trade conditions, was Martin’s next consideration. The idea for Fair Rubber eV was born.

Association law regulates the details. Practice guarantees that producers are the beneficiaries of fair trade. The producer stories testify to how diversely they use fair trade funds. What about the future? Fair trade with broad and long-term effects – from additional old-age or health insurance to a water project like the one on the Walpola plantation: water meters and a low usage fee not only finance a team that guarantees maintenance and repair, but also the start-up capital for other water projects . Fair trade in a pyramid scheme. For Martin, this will also mean in the future: watching and listening, recognizing connections, finding companions and developing ideas.

There is also a veranda with a view of the Indian mountains and a cup of tea … sometimes there are perfect moments even in fair trade.