At the recent World Rubber Summit in Singapore one of the world’s leading tyre manufacturers reported that they are trying to help 400 small farmers in one of their supply chains – using official governmental overseas aid – but without changing anything about the price they pay the farmers for the rubber. This company employs 65,000 workers worldwide.

The Fair Rubber Association has about a dozen members, mostly small companies, which at present co-operate with five primary rubber suppliers. The total number of small farmers and plantation workers involved: 4,315. And: The members of the Association voluntarily pay EUR 0.50/kg DRC (Dry Rubber Content) on top of the world market price, directly to these supplier partners.

At the Singapore event, a presenter from the Ivory Coast reported how he has been involved in negotiations on cocoa, which were meant to lead to a mutually agreed definition of ‘sustainability’. After three years of talks the only thing they could agree on with the buyers was that ‘sustainability’ consists of ‘three pillars’: The environment, social issues, and economic ones. Since then, the buyers put forward detailed lists of issues like deforestation, pesticide (mis)use, forced and child labour …but when the discussion touches on the (unsustainably) low price, the answer is that “this is a function of the market forces.”

In Singapore, representatives from Thailand (rubber producer No. 1 globally), Indonesia (No. 2), India, Sri Lanka, Malaysia… in a plenary emphasised one after the other that there was an urgent need to discuss pricing: The present level is causing small farmers to stop tapping, as they cannot even cover their production costs, the tappers move to the cities, or the rubber trees are cut down and replaced with oil palms. The comment of the session moderator: “Pricing is a multidimensional issue. Anything else?”.

Two days after the summit the Global Platform for Sustainable Natural Rubber (GPSNR) was launched – a rather late attempt by the major tyre companies in particular to address the issue of ‘sustainability’. The constitution of the new venture prohibits any discussion of price matters.

The Fair Rubber Association had been invited to join, at the reduced Non Governmental Organization rate of USD 3,000 p.a. We believe that our chosen route, i.e. paying Fair prices, is both more promising and more direct. 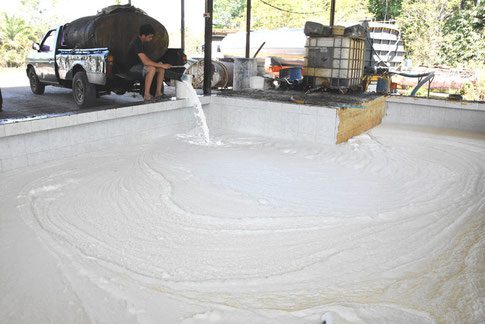 Collection point  for freshly tapped latex milk in Thailand: For years, too much production and large stocks have led to a ‘latex-milk-lake’ which in turn contributes to world market prices which are not sufficient to keep tapping viable.