Mr. K. Babu (aged 61) was the first rubber tapper to retire after the new supplementary retirement scheme was introduced at the New Ambadi Plantation. He is happy with the additional pension payments, from which he has been benefiting since August 2010.

The new system entails payments of Rs. 1000 in addition to the official pension. In order to make this possible, a one-off payment from the Fair Trade Fund was made to LIC (Life Insurance of India), which administers the money and is in charge of payments to the pensioners. This kind of arrangement is unique within India’s rubber industry.

Mr. Babu is happy that he can take life easier since his retirement, as his health is not what it used to be. For all of his working life he has tapped rubber trees, for which he had to get up every morning at 4 am. To be able now to sleep in until 6 am feels like ‘pure luxury’ to him.

His wife Vishalam (54) is still working on the plantation, and she has a few years to go until her own retirement: the first pension payment will be made to her in 2017, a date which will trigger other big changes. On that date, the family (including their adult daughter) will have to vacate the plantation-owned accommodation. They hope to be able to move in with their 31 year old son, who works on a nearby rubber plantation.

VASANTA KUMARI: PENSION FOR A WIDOW 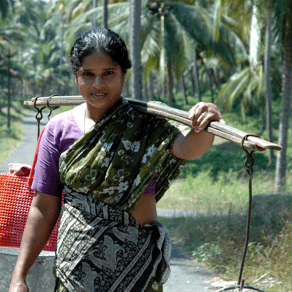 When an accident caused her husband to lose his life 17 years ago, Vasanta was – as was the custom – given the opportunity of taking her husband’s place working on the plantation. Since then, this widowed lady has been working on the New Ambadi rubber estate. As a widow and a single wage-earner, it is a particularly welcome reassurance for her that, thanks to Fair Trade premiums, she already holds two saving certificates which will provide some extra income when she retires. The official pension alone would be quite insufficient to cover even her basic needs. As a single mother, Vasanta raised three children. Meryn, the older of her two daughters, is living with her husband (who works as a lab technician in a hospital) in Chennai. Once a year Vasanti visits them and her granddaughter for a week. Her son, Manu Stephen, took a two-year course in hotel management after his high school graduation – which cost his mother Rs. 30,000. The younger daughter, Subi, is still attending school, which is government-run, so they only need to pay for exercise books etc. since there are no fees.

Vasanta, Manu and Subi are living in a tiny house, about five km away from New Ambadi. It comprises four very small rooms, a kitchen and bathroom – the toilet is a separate hut behind the main building. The house is connected to the main grid, and a possession of some pride is their television. But the public water supply in the street outside only provides water for an hour and a half each day, so this is only used for drinking and cooking. For all other purposes there is an open well, which the family shares with their neighbours.Every morning, when it is still dark, Vasanti takes a bus to work. The fare is Rs. 7 each way. A rubber tapper does two rounds of tapping per day, which usually yield some two buckets of raw ‘latex milk’. Most tappers have a bicycle, or even a motorcycle, which they can use to transport this harvest to the collection point. Vasanta has to carry her buckets using a shoulder pole: 45 kg of liquid, containing some 18 kg of rubber. For this amount she earns Rs. 126 as basic pay, and Rs 40 as volume bonus. The second round of tapping brings in an additional Rs. 72. Officially, tappers work six days per week; but like most of the others, Vasanta usually works on Sundays too. There is a much higher bonus paid for Sunday labour, and if all goes well, she can earn 2-3 times as much as on a normal weekday. Fortunately, a colleague by the name of Nagappan helps quite regularly with transporting Vasanta’s buckets on his bicycle.